cryolo_filament_import_relion
This version is outdated by a newer approved version.

How to import crYOLO filament coordinates into Relion

After the picking of filaments with crYOLO is done, one might want to import them into Relion. In this example I assume the following:

The following illustrates how you import the micrographs and box files into Relion:

3. We will start by importing the box files. Select the Import action. Under Node type, select 2D/3D particle coordinates. Under input files, point to your box files in the micrographs directory, where everything starting from the running number is replaced by a * (except the suffix (e.g. _autopick.box), if one exists). Press Run! 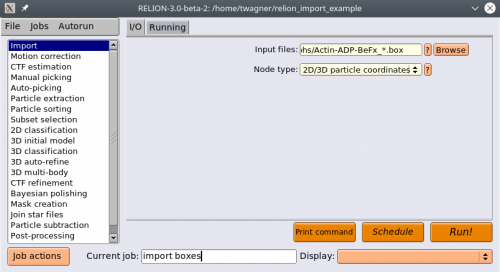 4. Now we import the corresponding MRC files. Select the Import action again. Under Node type, enter 2D micrographs/tomogram. Under input files, point to your mrc files in the micrographs directory, where the running number is replaced by a *. Press Run! 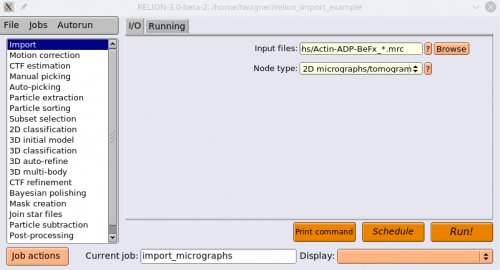 5. Now we will extract the particles. Select the Particle extraction action. For 'micrograph STAR file', select the micrographs.star file (You can find it in your Import/job00X directory), and for Input coordinates select coords_suffix.box. 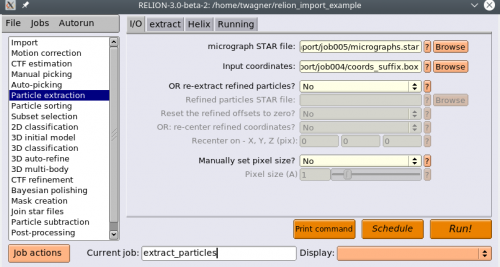 6. Go to the extract tab and set your Particle box size.

7. Select the Helix tab, and set Extract helical segments to Yes and Coordinates are start-end only to No. Also change your Tube diameter. Press Run! 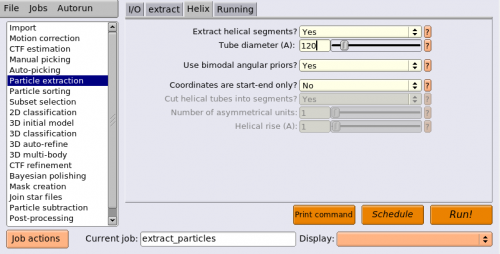 Now you have extracted your filament particles